Regarding dwarf vampires and drinking water

Do yourself a favor and read this Jonah Weiner profile in the NY Times Magazine on the reclusive brothers behind the Dwarf Fortress complicated, but retro-graphics computer game. It profiles a couple of interesting characters who have decided to dedicate their lives to an esoteric game rather than more traditional pursuits. Here’s a good bit:

If much of Tarn’s apartment suggests a tenant who never fully moved in, his bedroom suggests a tenant who never sets a sock outdoors. When I peeked inside, rumpled underwear, discarded boxes and books lay scattered across the carpet. A sheet of plywood, edged with black foam rubber, was wedged into the window frame and affixed there by metal clamps. Tarn wakes up around 3 p.m. every day, codes through the night and goes to bed around 6 a.m. The plywood keeps slumber-disturbing daylight out of the room, making it a chamber fit for a vampire dwarf — or at least for a computer programmer.

Tarn and Zach’s parents live on several wooded acres in nearby Bremerton, and Zach, who is 35 and between jobs, has lived with them since 2002. Zach brought over a drinking glass from the house in case I got thirsty, because Tarn owns only a couple of dishes. In the fridge were three sodas and a jug of water and nothing else. Tarn said I was welcome to anything, although the jug technically belonged to Scamps — the tap water has something in it that makes the cat refuse to drink it. Tarn consumed “maybe one glass” of water in the last three months, hydrating with soft drinks instead. “Water’s not doing it for me these days,” he said. “I know it’s bad, but the sugar goes right into programming the game. If I don’t drink soda now, I get a headache and can’t do any work.”

Great description and a hilarious quote. “Water’s not doing it for me these days.” You’ll chuckle about that line in a few days.

Meet Dale Price. For one year, he dressed up in a different costume and waved to his 16-year-old son as his school bus passed his house. Mermaid, football player, wedding bride, pirate — a new costume for every day of the school year.

He documented the whole year on his blog, www.waveatthebus.blogspot.com. So, why’d he do it? Well, you can read what he told the Deseret News here.

But, I think it’s because he understands that this world needs characters. He’s definitely in the club.

Like I’ve said before, the world needs characters. This guy fits the bill.

Find out about the other things John Duffy loves by reading his blog. 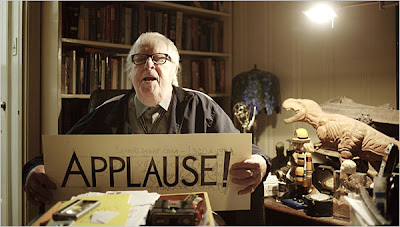 And speaking of characters, science-fiction author Ray Bradbury is another good one. He’s 88 now and is still going strong. (He’s the last of the great sci-fi triumvirate of Bradbury, Arthur C. Clarke, and Isaac Asimov.)

Here’s a great story in the New York Times about his efforts to save a library in California. Here’s a good bit from the article:

He also recalled watching the film “Pumping Iron,” which features Gov. Arnold Schwarzenegger in his body-building days, and how his personal recommendation of the film for an Academy Award helped spark Mr. Schwarzenegger’s Hollywood career. He remembers lining his four daughters’ cribs with Golden Books when they were tiny. And he remembers meeting Bo Derek on a train in France years ago.

Ms. Derek’s spokeswoman, Rona Menashe, said the story was true. She said her client would like to see some more of Mr. Bradbury, too.

Mr. Bradbury’s wife, Maggie, to whom he was married for over five decades, died in 2003. He turns 89 in August.

When he is not raising money for libraries, Mr. Bradbury still writes for a few hours every morning (“I can’t tell you,” is the answer to any questions on his latest book); reads George Bernard Shaw; receives visitors including reporters, filmmakers, friends and children of friends; and watches movies on his giant flat-screen television.

He can still be found regularly at the Los Angeles Public Library branch in Koreatown, which he visited often as a teenager.

If you haven’t read “The Martian Chronicles,” you should — even if you think you don’t like science fiction. I recommend “There Will Come Soft Rains” and “Usher II.”

Here’s a great story from NPR about a great character — Simon Sleigh, a Brit who holds the world record for eating 76 feet of a plant called a Stinging Nettle. An eating contest is held every year in the town of Marshwood, England, and Sleigh’s held the record since 2002:

“Because it’s so disgusting you think it can’t really be that disgusting, so you persevere with it and see how much you can actually eat,” he says. “And the more you eat, the more you realize you were right in the first place — it is disgusting.”

Sleigh attributes his penchant for nettle-munching to a peculiar life phase he was going through at the time he set the world record. Since then, he hasn’t eaten so much as a leaf.

“I think I was going through some sort of herbal crisis,” he says. “And so by confronting the crisis I was going through by eating these nettles, it helped me through. Now I’ve come out the other side, and to be honest I’m a much better human being as a consequence.”

That’s hilarious. The world is better off for Sleigh and all the other interesting characters who add flavor to our lives.