Well, here’s one way to end the scourge of Bratz dolls:

MGA Entertainment Inc. was dealt a knock-out legal punch late Wednesday when a federal judge ordered the company to stop making the doe-eyed, pouty-lipped Bratz dolls it’s been selling since 2001. Competitors go up against each other every day, but it’s rare for a court to order a company’s products off the shelf, legal experts said.

The ruling came after a jury found in August that the Bratz creator developed the idea while working at Mattel, maker of the iconic Barbie doll. After a four-year legal battle, the jury awarded Mattel up to $100 million in damages for breach of contract and copyright infringement.

At a government hearing in the U.K., this expert sums up what’s wrong with the dolls and the sexualization of our youth:

Mr Narducci warned that girls were effectively being trained to become sexual objects.

He said: “The use of sexual imagery is now more pervasive than before and it does give a very disturbing perspective on girls and young women.

I’ve written before about my disenchantment with Bratz, but the following items take the cake.

Take a look at the packaging for the “Bratz Play Sportz” dolls I saw tonight while Christmas shopping: 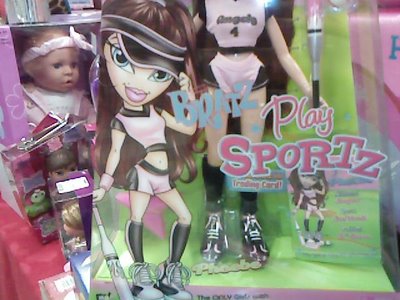 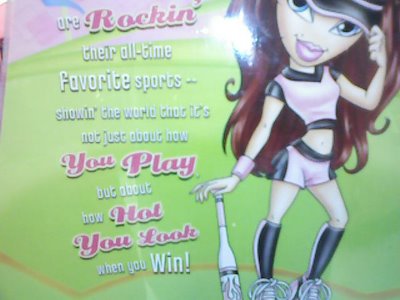 “Bratz are rockin’ their all-time favorite sports — showin’ the world that it’s not just about how you play, but about how hot you look when you win!”

What a lovely message for little girls everywhere.

What have we wrought?

A plan to launch a line of dolls based on US girl group The Pussycat Dolls has been shelved after toy manufacturer Hasbro Inc declared it “inappropriate.”

An activist group (which I’ll be joining) called Dads & Daughters organized a letter-writing campaign to scrap the dolls.

The leaders of the organization said:

We asked Hasbro executives to imagine encouraging their own six-year-old daughters and grand-daughters to engage in developmentally unhealthy behaviour … It appears they did that, and then made the right decision for their families, our families, and the company.

Well done. Now, if they could just do something about Bratz. 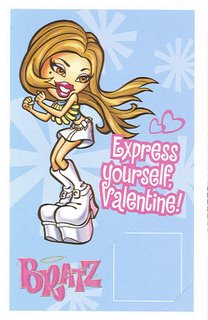 As I noted earlier, I find something objectionable in giving my daughter a doll with a visible midriff. The whole Bratz world continues a disquieting trend: The sexification of kids.

Apparently, not all parents agree with me.

Here’s what I think our society teaches young girls:

Get plastic surgery if you don’t think you’re pretty because being pretty is that important. (See TV shows like “The Swan.”)

Look at your body as the primary method to attract men. (See most music videos.)

The clothes you wear represent who you are (see Bratz.)

My daughter is 6 years old and I’m very troubled about these messages. I’m not the only one. Check out this awesome Web site called “Save Girlhood.” Here’s the tag line: “The way we see it, girls are growing up too fast.”