As I mentioned earlier, I got quite a bit accomplished on the boat-building project in June. Here’s a run-down of the progress.

I started with this: 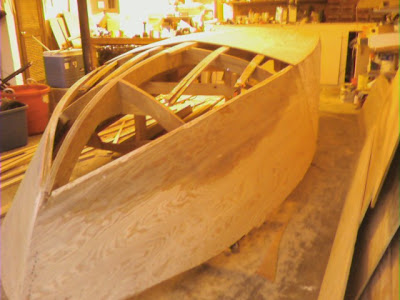 The bottom was just missing the two front sections of wood. Unfortunately, this area requires quite a bit of work to complete. I would have to cut and bend the plywood so that it matched up perfectly with the already attached side panels.

That task was easier said that done: 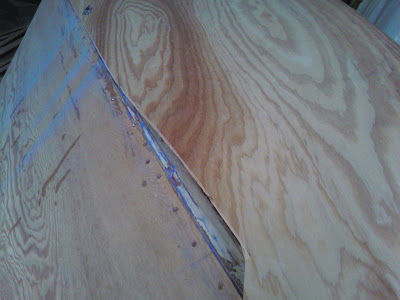 Oops — I cut a little too much wood out of this panel and had to start over. These sheets of marine-grade plywood cost about $50 each. Mistakes like this could prove rather costly. I made a similar mistake later and just decided to use a little extra wood putty and call it even.

Here’s how the panels looked when I cut them correctly: 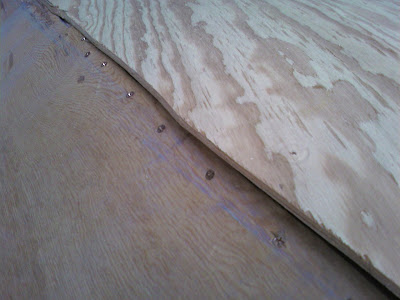 I’d usually start with a sheet like this — with a whole lot of extra wood hanging over: 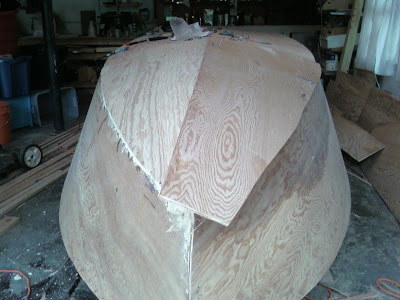 Then I would cut it down and bend it in to place. I held it into place with giant screws with big washers in em. Then I would cut the wood down to size. After I got it just right, I screwed the wood into the frames. Then I applied wood putty in the cracks and over the screws to make it smooth. Note the extra wood putty at the bottom — that’s covering a little over-zealous wood cut: 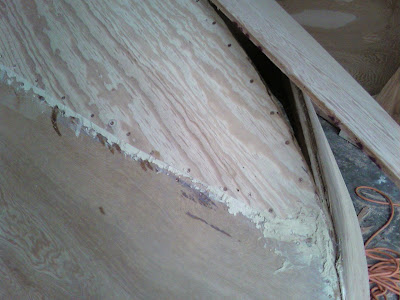 Here’s what it looked like almost finished. Note the giant washers holding down the right side — actually those aren’t all washers, I used anything large enough that wouldn’t pop through the wood due to the force of the bend. I think those are L-brackets: 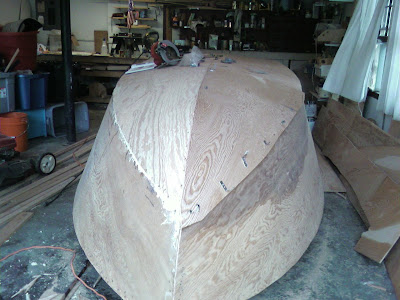 The toughest part was making the transition from an overlapping joint to a butting-together joint as it approached the front of the boat. No picture of that — but trust me, it was tough.

After the panels were all attached, I had to go under the boat to do a little work. First I had to take off the wires on the battens and allow them to spring up and touch the plywood at the front of the hull: 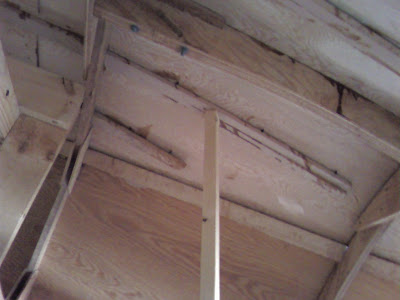 I used sticks wedged on the floor to help push the battens onto the plywood. Then, I drove in screws from above to connect to the battens. This was a little tough because I couldn’t see the battens from the top. I drove in screws from underneath that helped guide me. I also put my daughter Lydia under the boat and asked her to tell me whether I was hitting the battens. She enjoyed this — except when she got some glue in her hair. I just puttied up all those holes. I bought a lot of wood putty during this stage.

I also had to cut off the excess wood from around the bottom of the side panels. In many places I had an inch or two of wood that was extending beyond the true edge of the boat. I was trying to figure out how I would cut this extra wood off… I couldn’t get my power hand-saw down there, nor would my electric jig saw work. Finally, I realized a good ole hand saw would do the job just fine: 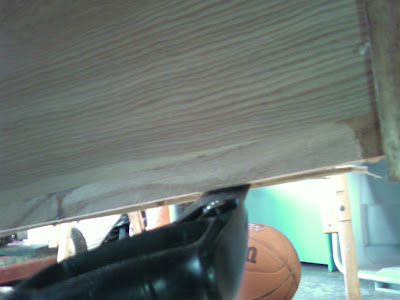 I can’t even imagine building a boat without using power tools — but that’s how everyone made them 100 years ago. Crazy.

Then, I realized that since I was about to fiberglass the bottom, I’d need to do something about the transom. Way back in 2007, when I started working on this boat, I bought a short-shaft motor to power her. Then, the motor on my little boat in Maine went out, so I took the motor up there for her. So, I’ll need to buy a new motor (probably next spring) for this boat, but it will likely be a long-shaft motor. Unfortunately, I’d already cut five inches out of the transom to accomodate the short-shaft: 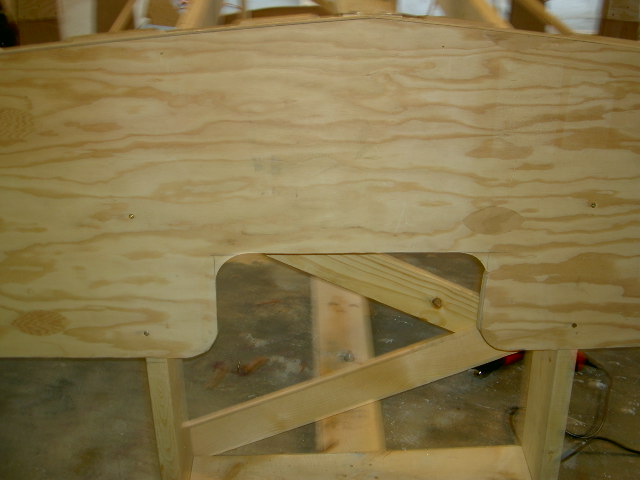 So, I had to fill in that hole: 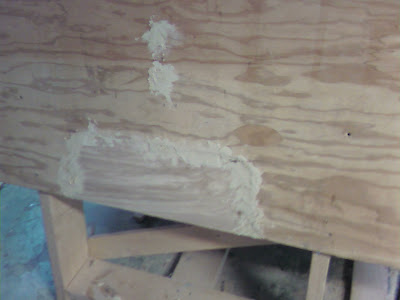 Took a few minutes to get that piece of wood cut close enough — wood putty did the rest.

Next, I was ready to begin the fiberglassing of the bottom. First I sanded the whole boat down and made all the edges curved, so that the canvas sheets wouldn’t leave any air holes. Then, I put two coats of glue over the whole boat. That made it shiny: 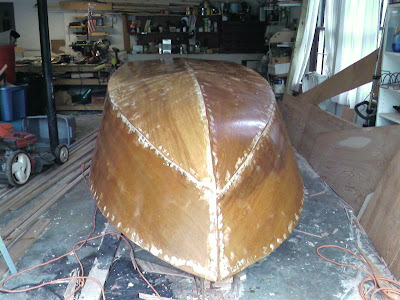 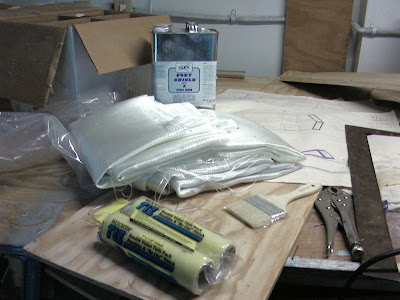 It’s essentially just canvas fabric, rollers, brushes, and glue. First, I laid the canvas onto the boat and tacked it down. I covered the canvas with glue and then it turned invisible. And that’s all there was to it — that’s fiberglassing. In this pic, the top is done and the sides are ready to be glued: 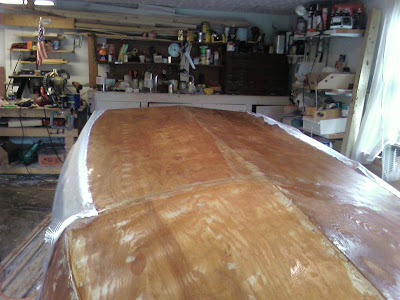 The boat-building kit I bought didn’t come with enough fabric or glue — had to drive to a boat store to buy more. That cost about $150. Of course, I had to buy paint while I was there — another $200. All in all, building this boat isn’t exactly saving me a whole lot of money…

Then I had to apply the skeg — a piece of wood attached to the keel on the bottom of the boat. I think it helps with stability or something. Here’s a picture of me painting it: 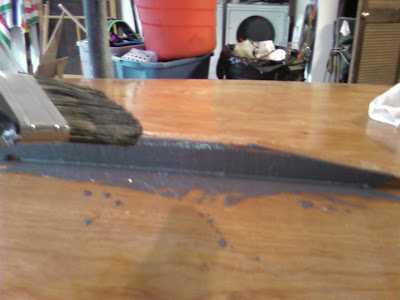 And painting this rest of the boat: 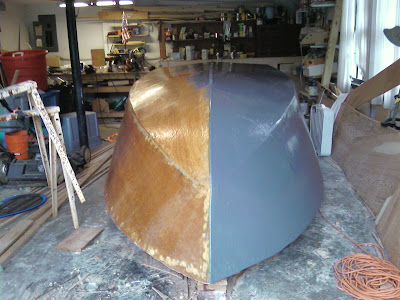 I bought two coats of primer — one gray and one white. Unfortunately, it wasn’t enough to cover the whole boat. So, the first coat of primer looked like this: 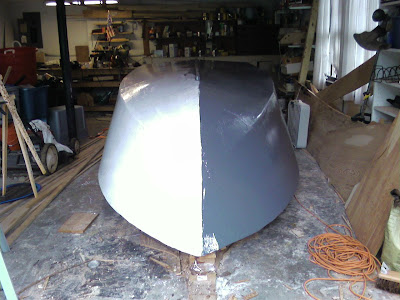 Kind of like the black and white cookie — living in harmony. So, I had to go buy more paint (sigh) and finish the second primer coat in white: 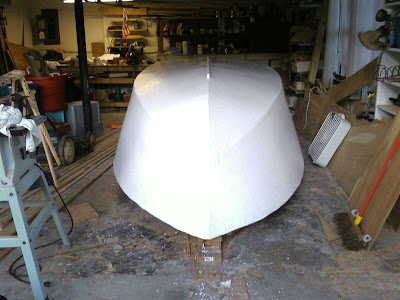 I picked red for the final color, but my family insisted that would be too flashy. So, I went with blue. I returned the red during one my extra trips back to the boat store. 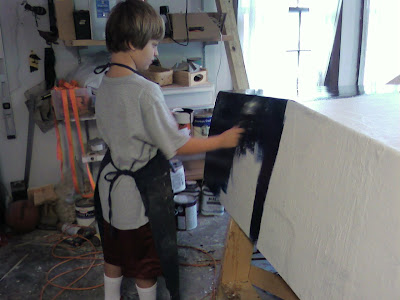 Now, I know it probably looks like I just gave him a job to help him feel involved. But, no kidding — my son painted the entire transom on his own. And he did quite a bit of painting on the rest of the boat too. Really helped speed up the work. 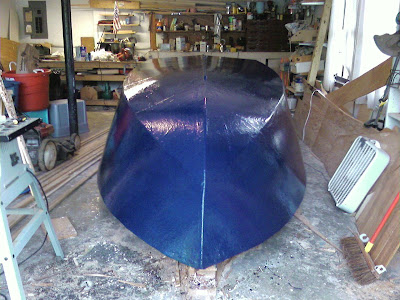 Looks like a boat, eh? So, now I’ve just got to flip her over and finish the inside. That’s all. I do intend to work on her during the weekends, not just during school breaks. I need to finish this project by next summer and get it out of my garage. So, this work-once-a-semester stuff is no longer going to cut it. Of course, I am wrapping up my PhD this year, so maybe I shouldn’t be too amibitous.

I’m still debating about the flip — a task I plan to accomplish before the end of this month. Some people are telling me that I need to build a cradle for the boat to sit in once she’s turned over. Others are more forgiving — just flip it over and prop it up with a few pieces of wood. Either way, I’m going to need a lot of help. I figure it weighs about 750 lbs. Don’t be surprised if I give you a call…