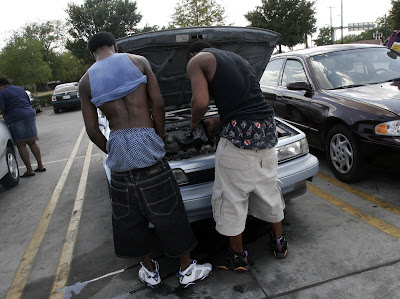 The legal questions surrounding the prohibition of saggy pants are quite interesting:

The judge overturned Riviera Beach’s saggy pants ordinance, which had prohibited anyone from wearing pants below the waist exposing skin or underwear.

A referendum endorsing the ban was supported by 72 percent of city voters in March 2008. Riviera Beach began enforcing the ordinance in July but it was ruled unconstitutional by Johnson, city spokeswoman Rose Anne Brown said.

Offenders were cited with a $150 fine for the first offense and $300 for the second offense, considered a misdemeanor. Brown estimates fewer than 20 people were caught with drooping pants since the ordinance was enacted.

This will surely be appealed. And Atlanta and many other cities will be watching. (I don’t think Atlanta is actually enforcing its ban.)

So, the legal question is — Is showing your underwear a form of political expression, and therefore protected by the First Amendment? I’d think that would be an uphill argument — but we’ll see.