My afternoon with the Iraqi journalists

My afternoon with the Iraqi journalists 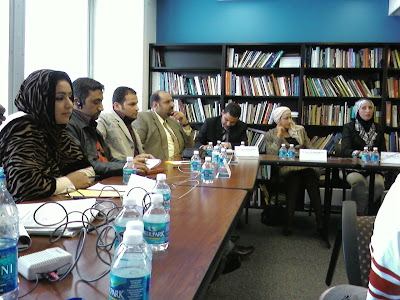 Seven Iraqi journalists visited Georgia State earlier today as part of a Center for International Media Education event. They worked for a variety of outlets including broadcast, radio and newspaper. Here are the highlights:

1) The journalists all stressed that the security situation in Iraq is incredibly stable. They didn’t seem worried about the pullout of American troops and predicted that the large majority would be gone by the end of the year. They seemed incredibly optimistic about the future of their country. They noted that streets were bustling and events like soccer matches were drawing big crowds.

2) Before I asked a question, I noted that after telling a friend I was going to meet with Iraqi journalists, he had warned me to “watch out for flying shoes.” They all laughed at my attempt at levity. But after answering my question, one journalist returned to my comment. She stressed that the journalist who threw a shoe at former President Bush was not revered by other journalists. Another reporter said that he had “tarnished the journalism profession.” At least one of the journalists appeared to sympathize with his anger toward Bush, but he said that didn’t excuse his actions.

3) A Lebanese PhD student asked a point-blank questions: Given a choice between today’s freedom brought about at the cost of thousands of deaths and the stable tyranny that existed under Saddam Hussein, which would they choose? Every one of the seven journalists supported Saddam’s removal, despite the cost. They all seemed thrilled with the press freedom enjoyed in their country and spoke with disdain of the Saddam era in which no one could report with fairness and accuracy. At least three or four made those points and no one spoke up to disagree.

4) I asked about the recent efforts of the military to shut down a newspaper and television station over false reporting. They said nothing would come of the incident — that it would blow over quickly. They noted there’s no law on the books allowing the government to shut down a press outlet. Amazing how quickly Iraq has adopted a viable legal system! They did note that other journalists have been harassed for their work (they spoke about one political cartoonist, specifically.) Other journalists keep an eye on this type of harassment and the government often backs down. It sounds like the political leaders are working to understand how to tolerate the press in a free country. And these journalists are learning how act as independent watchdogs of the government.

5) I also asked about the Sunni and Shiite split. They said that biased press outlets helped fuel tensions back in 2006 when violence was at its worse. One reporter said the press published cropped photos and half-truths. Today, the media are far less split along religious lines. One journalist said that most people are tired of those types of divisions. There’s simply been too much violence for people to continue acting along such a religious divide.

6) They asked a few questions as well — like why did the journalism students want to be journalists and whether we had any great journalism stories. We entertained them with a few responses and then ran out of time.

One final note. One reporter, about 40, noted that he had never flown on a plane. He was thrilled with the experience. He said that he looked forward to the day when Iraq regained its former glory and learned how to fly again. Given their statements, the country appears well on its way.