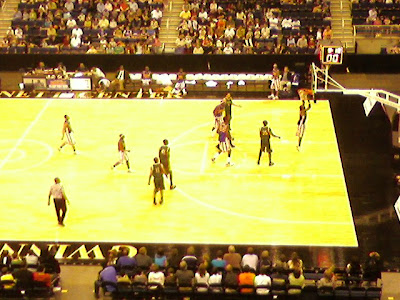 I attended a Harlem Globetrotters game today (see picture.) It was fantastic entertainment. I don’t think I’ve ever seen my kids laugh that hard.

It made me think about the classic made-for-TV movie featuring the Globetrotters and the cast of “Gilligan’s Island.” Allow Wikipedia to explain:

“The Harlem Globetrotters on Gilligan’s Island,” a 1981 made-for-TV film featured the Globetrotters alongside Bob Denver and the rest of the cast of Gilligan’s Island. The film’s plot follows the first animated series’ formula to a degree with a conflict that ends with an unusual basketball game against an opposing team made up of robots. The Globetrotters decide to play with standard moves in the first half, which the robots are able to counter, until Gilligan unwittingly comments that they have not done any fancy tricks, which make the Professor advise the team to use their comedic style of play to win, which hopelessly confuses the machines. However, a couple of Globetrotters suffer injuries, and Gilligan and the Skipper have to be substitute players.

One thing they didn’t mention. At the end of the movie, I remember that the Globetrotters somehow got rescued from the island but the regular cast remained marooned. Not sure how the writers worked that out — but they had to. Gotta leave that door open for a sequel.