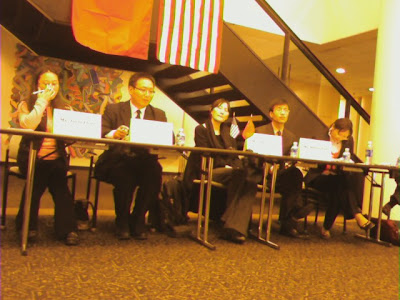 Here’s a picture from the forum I attended in Atlanta today with some Chinese journalism professionals. Quite interesting.

The woman on the left is a professor and the man to her right is an editor for a privately owned Chinese magazine. They were both clearly free-speech advocates who detested the Chinese system in which everyone must get a “license” to be a journalist. Apparently, there’s quite a bit of rampant abuse of the licenses, with many journalists trading coverage for bribes.

But the guy sitting second from the right was from the “Government Information Office” or something. He kept adding to the other speakers’ statements and setting the record straight on how China’s authoritarian approach is really best for everyone. He said that because of the Chinese Civil War and the Cultural Revolution many Chinese were suspicious of social movements.

One interesting point — there’s actually a considerable amount of press freedom. The state-owned papers are suffering from sharply lower circulations with privately owned papers and magazines picking up the slack. Many smaller outlets actually manage to report without interference, but they must be careful of how critical they are of the state. Too much criticism can lead to “sanctions” — although they never explained that definition exactly.

All in all, a great cultural exchange. I even shook everyone’s hand — including the government minder — and thanked them with my best “Xie xie.” A little cosmopolitan leftover from that trip to China.