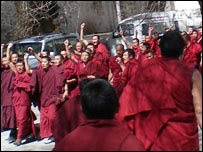 This could be the beginning of something big in Tibet:


Fires have broken out in the Tibetan city of Lhasa amid reports of rioting, as rare street protests led by Buddhist monks appeared to gather pace.

One eyewitness told the BBC how large groups of people were setting fire to cars and shops and destroying anything of Chinese influence.

The US embassy in Beijing said US citizens had reported hearing gunfire.

Rallies have continued all week in what are thought to be the largest protests against Beijing’s rule in 20 years.

The eyewitness who spoke to the BBC said there was a thick pall of smoke hanging over the city.

I hope this protest ends a little better than the one in 1989. The Chinese government can’t do anything too brutal with the Summer Games a few months away. I hope.

UPDATE: Here’s a Free Tibet blog with mobile phone pictures of the protests. More pictures here of protesters and police.