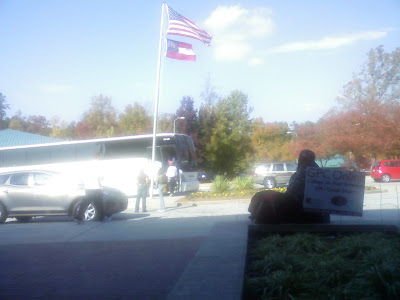 Sorry for the poor quality of the photo, but I found this to be an interesting scene.

The women by the bus are sending off the Georgia Perimeter College soccer team as they head to the national finals in Texas. These two female students got a little rowdy and are — let’s say, “performing” — for the male team members. In the foreground sits a muslim student dressed in a full burka — with nothing but her eyes showing. I wonder what she thought of this show?

In the background, of course, is the American flag. As Yakov Smirnoff would say, “What a country!”