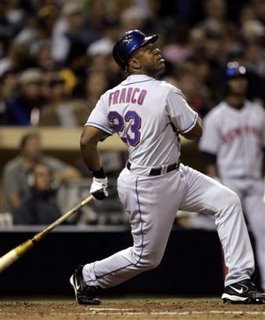 Julio Franco should be elected to the Baseball Hall of Fame:

Franco became the oldest player in major league history to hit a home run when he connected for a two-run, pinch-hit shot in the eighth inning Thursday night to help the New York Mets rally for a 7-2 win over the San Diego Padres. … Franco already was the oldest player to hit a grand slam, a pinch-hit homer and have a multihomer game.

The heroes of Cooperstown are men who should be remembered for how they played the game. I don’t see how we can let history forget Franco.